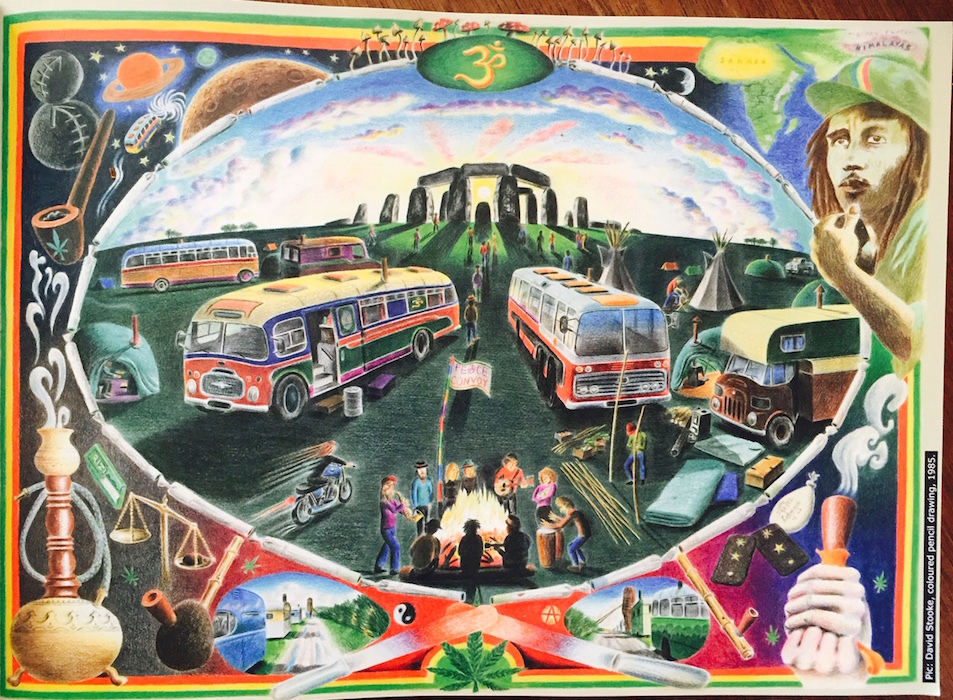 CN started as a collective of 6 people who gathered in Rougham in Suffolk the winter of 85/86 having all met at festivals previously. Sally Howell had been living and travelling with The Tibetan Ukranian Mountain Troupe, the UK’s first bus dwelling performance troupe, on and off since she met them on her childhood doorstep East Bergholt in 1980 until 1985 when she landed in Rougham.

That winter Sally was working as a Tree Nurse at a small community, where a few fellow travellers turned up with the intention of forming a travelling Circus/street busking act.  Because of the busking, music was dominant and they formed a skiffle/folk band called Stan’s Last Custard. Early into 1986 Sally and Andy Hope got together and Sally fell instantly pregnant with her first son Luke.

So that very busy year saw the birth of Croissant Neuf and her first son. The small Croissant Neuf troupe bought a marquee and took it to a few festivals around East Anglia and later to Glastonbury Festival where they mostly played music and ran an open mic stage as well as entertaining the crowds with colourful walkabout characters. To make ends meet they ran a small café serving mostly filled rolls, salad and of course….Croissants! This venue was in the top corner of which is now the Craft Field and although then was mostly acoustic they ran the festoon lights and small amplifiers from their trucks which had one wind turbine and one solar panel to top up the batteries.

1987 the Croissant Neuf troupe performed at a few events around the country and Sally had her second son Casey, who is now CN’s No 1 sound engineer. The troupe split off in their own directions and Sally and Andy took on Croissant Neuf as their other “baby” .

1998 they moved to the other side of the Green Field and teamed up with Wind & Sun Ltd to run a more powerful PA and in 1990 moved over the hedge into the top of what is now Green Futures Field. That year Sally had her daughter, Maya, who is also an integral cog of the Croissant Neuf wheel organising their stewards, helping with décor and on the production team.

A few years on the Croissant Neuf family and team took over the neighbouring field naming it after their new  venture The Green Roadshow which, when not at the festival, toured around parks all over the country for local authority green events for a glorious 17 years.

30 years on with a 1,000 capacity venue and state of the art equipment, Croissant Neuf is now run singularly by Sally but at Glastonbury festivals becomes a joint family venture with her ex-partner Andy powering much of the equipment with his huge solar rig alongside Steve of Wind & Sun, whilst Casey is in charge of the sound and Maya is Sally’s right hand. Luke is now a freelance Sustainability Consultant so is always there to pick brains.

The entire field has captured back its original name of Croissant Neuf and all our exhibitors, performers and crew look forward to celebrating 30 years of this pioneering solar powered venue with our extended family… Glastonbury Festival.