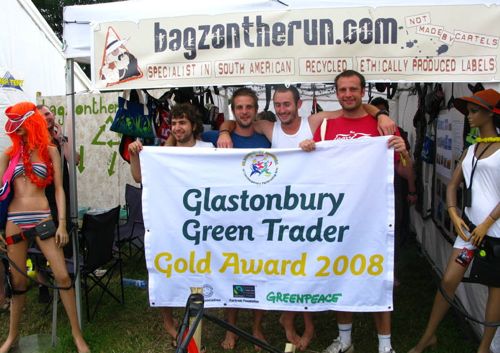 Glastonbury Festival, Greenpeace, The Soil Association and The Fairtrade Foundation announce the fourth Green Traders Awards which aims to recognise those Glastonbury traders who have done the most to give their businesses a low environmental impact. It rewards the two outright winners in the food and non-food categories and these Gold Awards include the prize of a free stall at the next Glastonbury Festival. Two runners up will win a Silver Award and a case of champagne. Each of the four winners receives an award banner for their stall.

This year also sees three new awards. One presented by the Fairtrade Foundation to the trader doing the most to promote the fairtrade ethos; a best organic trader award presented by the Soil Association; and if you’ve been a trader before and entered this competition then we’ll be on the lookout for a winner in the most improved category.

If you’re a registered 2009 trader and would like to enter, click here to fill in the form by Wednesday 17th June.  Then when the Festival opens one of the Green Traders Awards team might call on you and judge you on your replies to see if you make it into the finals when they pick the winners.