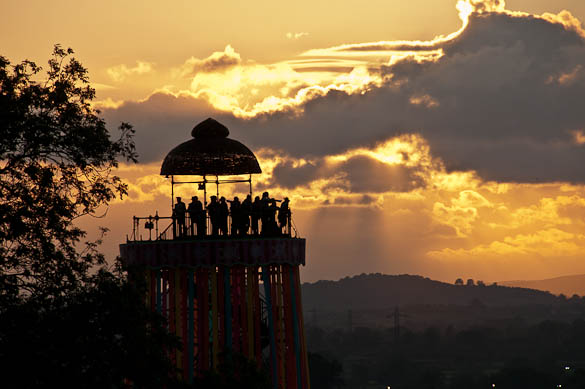 With a fallow year scheduled for 2012, this was the last Festival for two years. Tickets sold-out the day they went on sale and when gates opened on Wednesday morning, tens of thousands of revellers made their way in – a full two days before main stage music action kicked off. Traffic ran smoothly with no particular delays to the site. However, sheer numbers meant there were some queues at the pedestrian gates.

After the scorching heat of 2010, showers painted the air during the opening days of the festival. Umbrellas were opened and wellies were thanked. At least it had been worth hauling them cross-country. 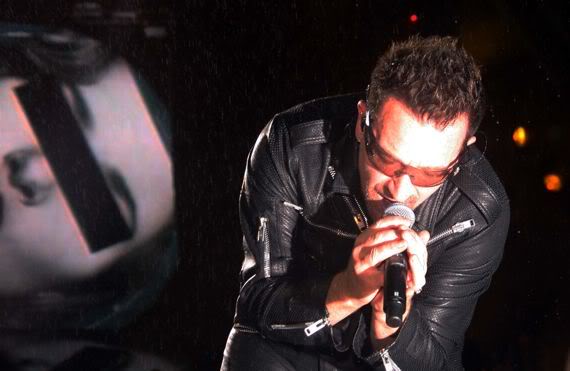 The rain tried to dampen Friday night’s headline Pyramid performance by U2, but as Bono and his band tore through a powerful, career-spanning set, the barrage of crowd-pleasers drowned-out the weather instead. Chase and Status and Cee Lo Green raised pulses over on West Holts, while across the fields on the Other Stage, Primal Scream battled the elements with a fierce back-loaded set. Earlier that day, as Fleet Foxes hypnotised their brimming crowd with their haunting, reverb-driven folk, thousands traipsed through drizzle to the Park, for the day’s much anticipated Special Guests. There, the packed hillsides were treated to a suitably atmospheric, un-billed set from Radiohead.

Stornoway opened Saturday’s Pyramid stage, warming soggy souls with their shimmering folk-pop as the sun’s rays teased shoulders out of macs. It was a welcomed warmth that awoke the grass and brought a bright new buzz to the previous-days’ bedraggled. Blur’s rough diamond, Graham Coxon, and New York’s new wave stalwarts, The Walkmen, rocked The Park stage before the day’s Special Guests, Pulp, delighted record crowds with a triumphant greatest hits set. At the John Peel Stage, Noah And The Whale lead a rousing sing-along while at the Pyramid, Elbow delivered a deep, happy sigh of a set matched in beauty only by the setting sun which it soundtracked. Coldplay followed and in their charming, inimitable way, played a thrillingly-paced, momentous show, lighting up the Pyramid stage both metaphorically and, for the first time, literally. Over the way, The Chemical Brothers ignited the Other Stage with their explosive day-glo beats and propulsive rhythms. 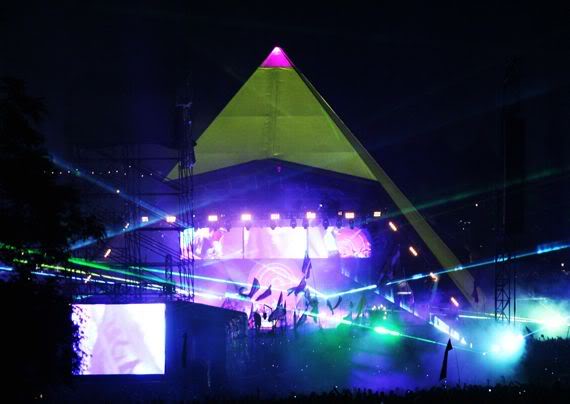 Elsewhere, over the weekend, East Dance played host to heavyweights Fatboy Slim, Carl Cox, Professor Green and Pete Tong as well as memorable live appearances from Ke$ha, Fenech-Soler and Azari & III. Away from the main stages, the Kidz Field – this year playing host to tot heroes The Gruffalo and Rastamouse – was a world of inspiring invention, bustling with kid-friendly mayhem. In the Circus tent, No Fit State Circus redefined the genre with their frenetic and jaw-dropping show.

Down in the late-night corner, a new one-way system was introduced after hours to ease revellers through the distorted wonderland of the south-east corner of the site. There, apocalyptic Arcadia impressed with its mesmerising fire shows on the new fully-animated 360 degree stage. Block9 again hosted an alternative reality, spiked with the surreal: its surging nightclubs and pounding house-parties set in crumbling inner-city towerblocks, built from scratch in a farmer’s field. While over the railway track, the dystopian future-themed Shangri-La enticed and seduced as a neon-lit pleasuredome.

Of course Glastonbury is not just about hedonistic abandon. Mind-altering Green-themed debates and inspiring talks from the likes of Tony Benn and Clare Solomon rocked Billy Bragg’s Left Field. And throughout the Festival, over £2 million was raised for WaterAid, Greenpeace, Oxfam as well as other local good causes. Up in the Park, the White Ribbon Alliance were again raising the plight of mothers and the right for safe childbirth throughout the world.

For young tykes and Pixar fans, the Pilton Palais Cinema was the only place to be on Sunday morning; the tent was filled to the rafters for the UK’s first screening of 3D high-octane extravaganza Cars 2. The Pyramid stage opened with the stirring baritones of Port Isaac’s Fisherman’s Friends. Later on the main stage, Laura Marling’s sassy timeless folk echoed the heady warmth of the afternoon. Paul Simon resurrected his hits to the packed banks of the Pyramid Stage field while on the Other Stage, TV On The Radio brought a refreshing blast of spiky alt rock. 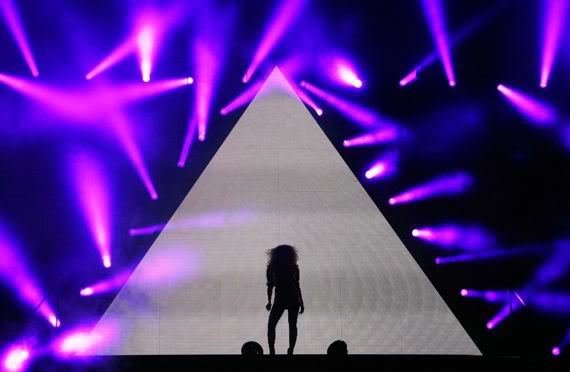 Later in the valley, as Pyramid headliner Beyoncé belted-out bootilicious platinum chart-toppers, on the Other Stage, Queens Of The Stone Age offered a raucous adrenalin-fuelled antidote to Mrs Z’s feisty tunes. Above the writhing bacchian mass, up on the sloping hillsides, the enchanting wonky world of The Park was perfectly soundtracked by Sunday night’s headliner, Welsh psychedelic pop-meister Gruff Rhys. From there, high over the site the picture was perfect. Pastel skies prevailed as a crystalline sun set on another great year. 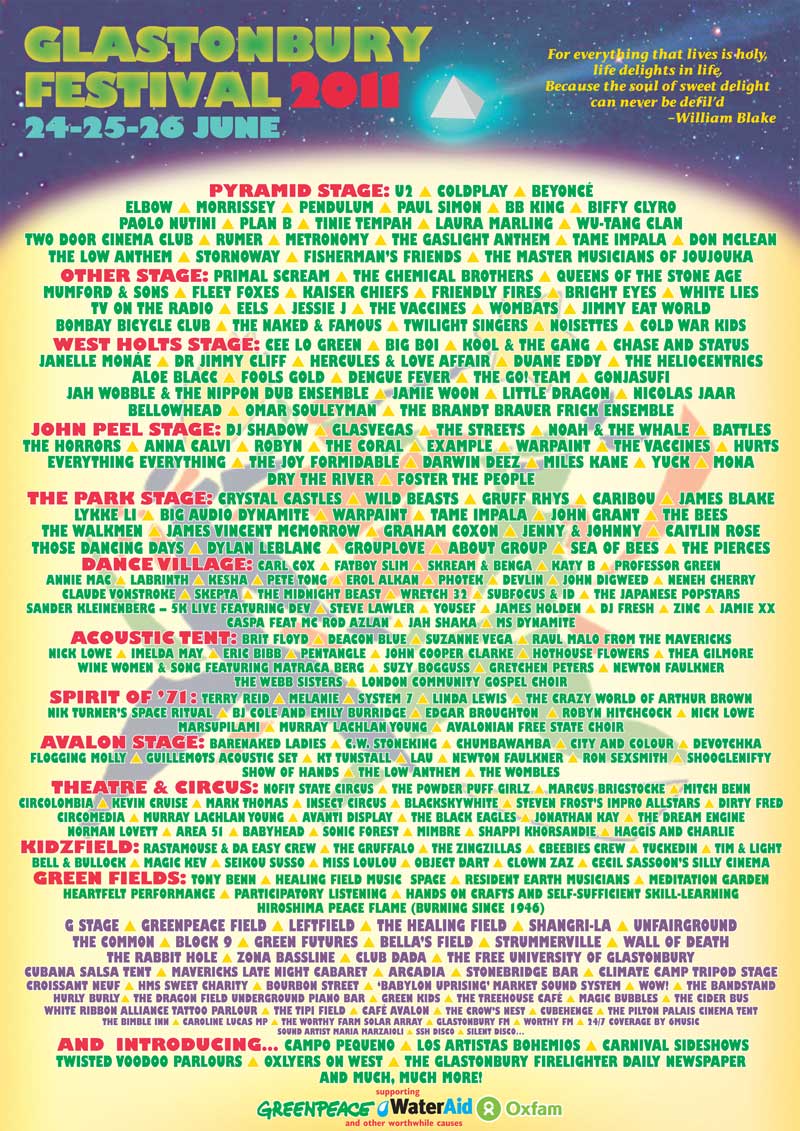